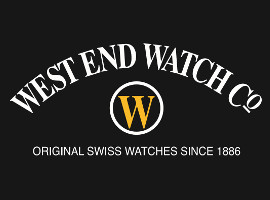 For the past 125 years, Switzerland’s West End Watch Company has provided hardwearing and practical watches to the world’s most inaccessible markets.West End watches are built to endure extremes of heat, dust, cold and wet. They are fitted with Switzerland’s most widely sold mechanical movements known to watchmakers around the world. The watches are carefully assembled and thoroughly tested in the southern Swiss town of Leytron, among the castles and Alps of Canton Valais.While remaining true to its markets, West End has also remained true to its product: a reliable Swiss mechanical watch with the highest practical value for the least cost of ownership. By keeping to this policy, the West End Watch Co. has sold more than 15 million watches since it was founded in 1886 and has created some of the most popular models in watchmaking history.